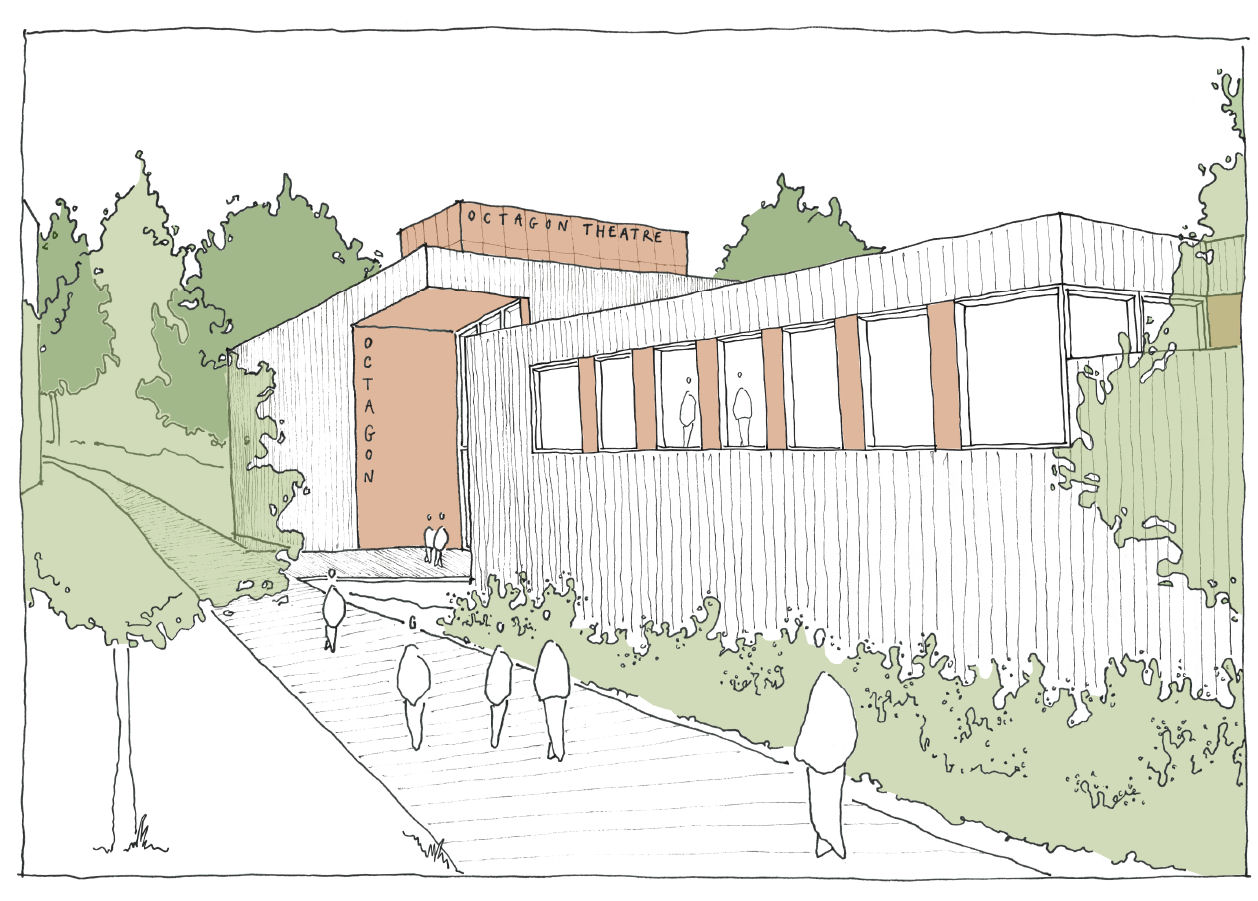 On Thursday 25th of March, members of South Somerset’s District Council voted unanimously in favour of the redevelopment of The Octagon Theatre which will see the theatre transformed into a flagship venue for the arts and entertainment in Somerset.

The Octagon Theatre originally opened as The Johnson Hall in 1974 and was named after local businessman and philanthropist W. Stanley Johnson who gifted £40,000 towards the building of the hall in 1950. The Council meeting on the 25th of March was opened with an impassioned speech from Adam Dunseath, W. Stanley Johnson’s great grandson, who has had a successful career performing and working in West End and commercial theatre, and has recently relocated back to Somerset.

Adam Dunseath said “I am delighted to support this project and endorse it on behalf of my family. My great grandfather did so much to ensure the people of Yeovil and the surrounding area had access to excellent cultural and sporting facilities, so I wanted to play my part in the development that will bring happiness and wonderful opportunities for generations to come.”

The pivotal vote to proceed with the development follows the Government’s Budget announcement on the 5th of March which featured a major boost for the project, with £10 million being pledged to help fund the refurbishment of the venue.

Adam Burgan, Arts and Entertainment Venues Manager, said: “The team at The Octagon and I are delighted that the project has been approved and we can now move forward in refining the plans for the development of our theatre. We know how much The Octagon means to our audiences and artists and we can also see the huge potential for developing the theatre to bring bigger and better shows and provide opportunities for everyone to benefit from the arts and entertainment. After what has been a very bleak time for theatre and live entertainment the future looks very bright and incredibly exciting.”

The project, set to cost in the region of £23 million excluding VAT, will see the theatre based in Yeovil, add a fly tower and circle that will take the seating from 622 to 900 - this will mean big advances in productions that could attend the venue including touring plays and musicals. Work will also see the venue become fully accessible throughout, add two additional boutique spaces which could potentially be a cinema/studio plus an additional cinema. The venue would also see purpose built studios created with an improved community Café Hub and separate restaurants areas.

The Octagon Theatre has been entertaining audiences since 1974 and attracts many visitors from far and wide with a diverse range of artists and events from big name comedians, classical music and opera to rock and folk music, the very best in variety alongside superb plays and ballet, and not forgetting the blockbuster pantomime. The theatre is also the home to many local community groups where local talent is regularly celebrated. In 2019, 125,000 people bought a ticket for an event at The Octagon Theatre whilst thousands more took part in one of the weekly classes as part of our Octagon Academy participatory programme.

The Council’s unanimous decision to proceed with the development will allow the project to progress through to the next stages of planning, with work continuing to form a timescale and refine plans.

The Octagon Theatre’s staff will continue to seek additional funding to reduce the amount of initial capital required from the council and the amount loaned for the project that would be repaid by the theatre.

During the coming months the plans for The Octagon Theatre will be put to public consultation, where the public will be able to find out more about the plans for the venue, ask questions and voice opinions.

Although the Council have agreed to proceed with the project, this is a long-term project that will require sign-off from councillors at further stages of the process. Planning and construction is currently forecasted to take approximately three years.

How is the project set to be funded?

A large capital development like this proposal is an expensive undertaking and there are of course risks involved that will need to be carefully managed.

At South Somerset District Council, there are robust business plans and development plans in place and the council has an excellent track-record of delivering large scale build projects for the community. The total cost, including architects and consultants’ fees/charges and a contingency fund is £23million. We know this is no small sum to be found and this would mark a major investment for the area.

The council were originally seeking to secure £5million from national funding bodies such as Arts Council England, this has already been superseded with £10million being pledged through the Government’s budget on the 5th of March. Although this substantial pledge has far surpassed the national funding body goal, further funding will be sought to minimise the amount needed from alternative sources.

Through local funding we are aiming to raise £250,000 and this has already begun with our ‘Name A Seat’ campaign and successful fundraising from The Foyer Club Charity who have been fundraising to support the ongoing development of the theatre.

We will secure funding from other grant making bodies, including recovery grants, Section 106, Community Investment Levy and other sources.

SSDC could loan itself a significant portion of the funds that would be repaid (plus interest). Payments from the ticket levy (paid by users of the theatre) would mean that over time the theatre will pay for itself and the project will not have cost the tax payer anything.

What are capacity rates now for the venue?

The Octagon Theatre currently plays to 83% capacity throughout the year with an average of 250 performances staged annually, well above the national averages for theatres.

The theatre is popular with artists and producers who appreciate the friendly welcome from our technicians and warm and responsive audiences.

For example, while the front of house areas were extended and seating refurbished in 2003, there is no disabled access backstage for visitors, staff, artists or those with mobility needs and we currently only have one accessible toilet situated front of house. The front of house areas have begun to look tired, dated and often feel cramped. The popular and profitable café bar is hampered by being wrapped around the auditorium with diners’ meals interrupted by the arrival of audience members. The kitchen is small and inadequate for the size of the restaurant and the front of house areas lack air conditioning. The popular Octagon Academy classes take place in a small studio obstructed by a supporting pillar in the middle of the room, with no windows or air cooling and a lack of ceiling height for dance classes. All of this aside, it is a very well loved and used venue, but could be so much more to our communities and visitors.

Why make the investment now?

This project has been in development for some time now, pre-Covid, and although the pandemic has affected the way we operate, it’s not slowed down our ambitious plans to invest for the future. Whilst it is important to be prudent it is also important to have hope and optimism for the future.

We know our audiences are keen to return when it is safe to do so and the uncertainty we currently all face is temporary. When it is over we will need music, theatre and arts to bring us all back together. Those places that bring friends and families together to feel joy will be more important than ever and we will appreciate them even more.

During times of economic downturn and instability theatre, arts and cinemas tend to perform very well and often show an increase in attendance. This was the case in the financial crisis when our audience continued to grow. It is understood that this is because people will spend their money on things that ‘cheer them up’ and experiences that families and friends can do together, a trip to the pantomime for Christmas, or a concert to escape becomes an affordable treat. The construction of the development and larger operation will create and establish jobs. It is estimated that the developed Octagon Theatre will create an additional £9.2million that would be retained locally every year. Visitors to The Octagon Theatre support our ‘night-time economy’ including hotels, restaurants, car parks, and shops in the area. Businesses will also be more attracted to an area with a stronger cultural offering.

This project offers a compelling economic case and significant improvements for the health and well-being of our residents.

What about your other venue, Westlands Entertainment Venue?

We are very fortunate in Yeovil to have two great entertainment venues. The team who manage The Octagon Theatre took on the management of Westlands Entertainment Venue following its refurbishment in 2016.

Westlands is home to a beautiful ballroom which is a flexible space that can be used for banqueting, parties, conferencing, trade fairs, standing gigs and live performances (seating 870). The venue has meeting and function rooms which are used for both smaller regular events and larger scale events like Yeovil Beerfest. Having a joint management team means that the programme and activities complement each other.

During the construction phase that would close The Octagon Theatre we are lucky that we will be able to move many shows and activities to Westlands Entertainment Venue allowing us to retain our audiences and continue providing excellent entertainment in South Somerset. Westlands is a superb multi-purpose venue but it will never be a theatre, as the venue lacks the stage size and backstage facilities, to present large, technically challenging shows. The redevelopment will see both venues play to their strengths and the film programme at Westlands relocated to purpose built, comfortable and luxurious cinemas at The Octagon Theatre. We believe with both venues we can diversify our programme and offer an exceptional programme of performances, events and activities that will make Yeovil the destination for culture and entertainment and further support the local economy.

What is the next stage?

Now that South Somerset District Council have given approval for the development to proceed, designs will be refined further, a timeline for the project will be developed and then consultations will begin with audiences, artists, local communities, business groups and national bodies to get their input, advice and thoughts on our proposals.

When can the public have their say?

A public consultation will take place in the coming months, at which time we will share our plans and make sure you have the opportunity to have your say. We have a dedicated consultation section set up on the SSDC website and we’ll post all details there and make sure any consultations are well advertised and look forward to receiving feedback from all in due course.

Where can I see more about the plans?

Further information on the plans for the venue can be accessed here: https://www.octagon-theatre.co.uk/news/the-octagon-theatre-development-50-years-in-the-making/